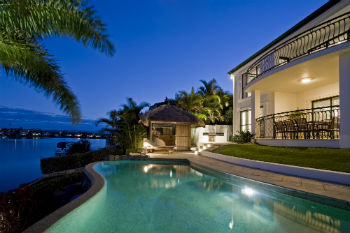 In California, a landowner has no enforceable property rights to an unobstructed view. That means, you can’t force your downhill neighbor to trim their trees. However, I have seen the occasional CC&R’s from planned communities that restrict heights of trees, plantings, and structures to ensure that the homeowners can enjoy their view.In those circumstances, the restrictive covenants are strictly construed against the person seeking to enforce them. American jurisprudence favors alienability and free use of land so that will be the default legal view.

In the recent case of Eisen v. Tavangarian, the appellate court evaluated the CC&R language governing lots in the posh Marquez Knolls area in Pacific Palisades, California. The properties are nestled in the hills in this exclusive community overlooking Los Angeles and the Pacific Ocean. The homes are likely valued in excess of $4 million and accordingly the view of the ocean no doubt has some impact on the high property values.

At the trial court level, the owners of the Tavangarian property were ordered to remove the privacy wall, the cantilevered roof, and air conditioning ducts and related equipment. Additionally, the court ordered the trimming of hedges that were far taller than the 3 foot height limitation of the CC&R’s.

The Eisens did not fare so well on appeal. The appellate court interpreted the CC&R’s and concluded that what there was in fact no restriction in the CC&R’s that applied to remodeling at all. The restrictive covenant stated merely that “one two-story single-family dwelling may be erected were said dwelling will not detract from the view of any other lot.” Since elsewhere in the CC&R’s there was language regarding alterations the court interpreted that the language for second-story homes did not contain restriction on alteration. Further, the court noted that the CC&R’s restricted only the developer’s initial construction. Thereafter, there was limited oversight by the HOA as to “alterations” which oversight eventually terminated.

I was surprised at the opinion’s lengthy parsing of “alter” versus “erect”, which the appellate court determined distinguished between remodeling and the initial construction. I also found it strange that the court should determine the developer would limit only single story homes and not the rare unicorn—the two story homes in the development.

Ultimately the appellate court’s interpretation was so narrow that all the Eisens had left on their initial award was the reduction of height for the hedges.

Most CC&R’s are drafted to deal with the developer’s initial concerns, and often contain restrictions to deal with not only municipality rules but what the developer can reasonably forecast. It’s possible that when the developers built the homes in the 1960’s, they couldn’t imagine the houses would need much remodeling. Or maybe their attorneys simply failed to draft the language consistently to give the same restrictions to two story homes (of which it was subjective) that applied to single story homes.

Notably, the Marquez Knolls Homeowner’s Association filed an amicus brief supporting the Eisens. Clearly the other landowners in the tract are now aware that upstart investors of the two-story houses can start remodeling without considering height or view restrictions, jeopardizing the views that the residents have long enjoyed.

California Landlords: Do you know the difference between a “Service Animal” and an “Emotional Support Animal”?