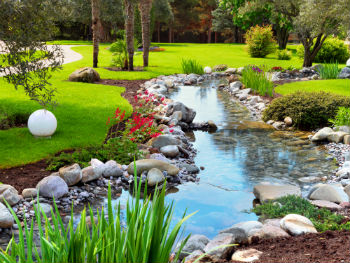 Neighbor disputes over shared boundaries can arise over a misplaced fence, a shared driveway, or water rights. These claims are heavily fact-based and often the accuracy of the modern survey can only be overcome with meeting the elements for adverse possession or prescriptive easement.

In recent decades California courts have fashioned various remedies instead, such as the equitable easement and even the “irrevocable parol license” over someone else’s property.

Twenty Five Years of Driveway Use:

In Los Angeles, Mr. Kaler gained the approval of his northerly neighbors, the Stevens, to construct a driveway that would encroach slightly upon the southern half of their property. The driveway consisted of two cement strips about one and a half feet wide and took part of two Sundays to install. Mr. Kaler did the work himself, admitting to only a small expenditure for materials. In the years that followed Mr. Kaler used the driveway intermittently, always gaining the approval of subsequent owners of the Stevens property.

Fast forward roughly twenty-five years, an argument ensued when the successor of the Stevens property, Mr. Brown, began parking his car in the driveway. Mr. Kaler filed suit alleging a right of way by prescription and an irrevocable license, the latter being founded upon incurring a supposedly great expense in the grading and cementing of the driveway.

The court did not appreciate the exaggeration of expenses incurred by Mr. Kaler in cementing the driveway, discrediting the expenditure as trivial. The Court further noted that Mr. Kaler was fortunate enough to have had twenty-five years’ use of it, and thus had been amply repaid. As a result, the court found that revocation of permission to use the driveway would not result in injustice.

In Novato, Mrs. Poksay began planting along an access easement that ran 30 feet by 150 feet along the boundary of her neighbor's property. Marin County property values are high and no doubt the hawthorn trees, Australian tea trees, daylilies, Mexican sage, breath of heaven, oleander, flowering pear trees and evergreen shrubs significantly enhanced the curb appeal of both properties. Over the years, the Poksays paid gardeners, installed drip irrigation, water fixtures and lovingly tended this significant sized strip of land themselves as well to maintain its beauty.

Many years later, the Donettis bought the property from the Poksays and added more plantings. In 2004, the Francs purchased servient tenement (the property subject to the initial access easement landscaped by the Poksays). After many years without issue, the Francs demanded the Donettis remove all the landscaping and took acts in furtherance to remove the irrigation and gardening accountrements.

The Donettis filed an action seeking relief. Basically they wished to expand the pre-existing express easement to also include an irrevocable parol license not only for themselves, but also for their successors in interest to maintain and improve the landscaping, irrigation and lighting within the easement.

The Donettis won and the Francs appealed.

On appeal, the Appellate court affirmed the lower court’s decision and gave its rationale, finding that it would be inequitable to terminate the permissive use that the Donettis had enjoyed and concluding the Donettis had an “irrevocable parol license” to maintain and improve the landscaping.

WHAT’S THE DIFFERENCE? Unlike the Donettis, the Kalers failed to show the incurrence of great expense (and effort) in furthering the license. The Court denied the Kalers claim for irrevocable license. Additionally, the Donettis already possessed some rights to the disputed land. This extension of their rights and the mutually conferred benefit to the servient tenement no doubt also played a role in the balancing.

HERE’S WHY THIS IS IMPORTANT: Licenses are usually revocable, so they have some duration at which they will end. The Donetti’s license was irrevocable and was granted not only to the present owners, but also to their successor-in-interest. That means that when the Donettis sell or transfer their property, the license is also transferable to the new owner. This is akin to a permanent right that runs with the land, the way an easement does. In the Donettis’s case however, there is some support that the beautiful landscaping is beneficial to both parcels and enhances the value of the land. The same may not be true of a driveway that benefits only one of the properties.

These cases only further muddy the waters and makes evaluation of each respective neighbor’s rights difficult. The law was already scattered on boundary disputes, with findings swinging in either direction depending on the sympathies to the parties. This sympathy, or lack thereof, is evident when reading the denial of the Kalers claim, which the Court casts aside as trivial. Hopefully, the Supreme Court will take a look at this issue and provide definitive clarity, especially with regard to rights what seem so permanent in nature, contrary to what a “license” is intended.

COMMENT: Why were the Donettis entitled to such a big win? Conversely, were the Kalers denied simply because Mr. Kaler chose to do the work himself rather than incur excessive costs hiring outside laborers? Serious questions remain regarding what constitutes “great expense.” Courts assess neighbor disputes for fairness and balancing the equities. In the case of the Donettis, the courts likely weighed the benefit to the the fee simple owner of the land (the “servient tenement”) from letting the effort and funds expended by the easement holder (the “dominant tenement”) for decades. What if the Donettis sell their property one day and the successors no longer maintain the landscaping nor pay the water bill? Could the servient tenement compel the Donettis’ successors to maintain the property? Perhaps more likely, the servient tenement holders would allege abandonment and seek a termination of the license. More importantly, what is the future of neighborly accommodation? Can an owner ever grant their neighbor a simple license without fearing that over time, it would become irrevocable some day?

On behalf of Diemer & Wei, LLP

More posts from author
Friday, 17 September 2021 Diemer & Wei is Pleased to Welcome New Attorney, Paul John Badum, to the Firm.
Wednesday, 05 August 2020 Why Lenders Should Beware the Full Credit Bid in California
Wednesday, 20 November 2019 What Must A California Landlord Disclose to Tenants?